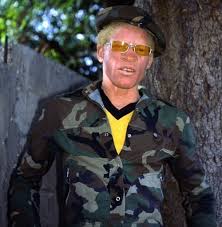 Winston Foster, better known by the stage name Yellowman, is a Jamaican reggae and dancehall deejay, also known as King Yellowman. He was popular in Jamaica in the 1980s, coming to prominence with a series of singles that established his reputation. 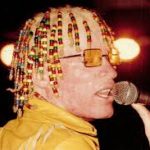 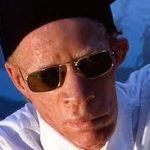 Winston Foster was abandoned by his parents and grew up in the Maxfield Children’s Home and the Catholic orphanage Alpha Boys School in Kingston, and was shunned due to having albinism, which was not typically socially accepted in Jamaica.Alpha Boys School was known for its musical alumni. In the late 1970s Yellowman first gained wide attention when he finished second (to Nadine Sutherland) in the 1978 Tastee Talent Contest. Like many Jamaican deejays, he honed his talents by frequently performing at outdoor sound-system dances, prominently with Aces International. He had success as a recording artist, working with producer Henry “Junjo” Lawes.In 1981, after becoming significantly popular throughout Jamaica, Yellowman became the first dancehall artist to be signed to a major American label (Columbia Records).

His first album release was in 1982 entitled Mister Yellowman followed by Zungguzungguguzungguzeng in 1983 earning instant success. Yellowman’s sexually explicit lyrics in popular songs such as “Them a Mad Over Me” boasted of his sexual prowess, like those of other reggae singers/deejays, earned Yellowman criticism in the mid-1980s. Yellowman appeared in Jamaican Dancehall Volcano Hi-power 1983 which featured other major dancehall musicians such as Massive Dread, Josey Wales, Burro Banton and Eek-A-Mouse.

Yellowman proclaimed, “I never know why they call it slackness. I talk about sex, but it’s just what happens behind closed doors. What I talk is reality.”

He had success in 1987 with a version of “Blueberry Hill”, that topped the charts for several weeks in Jamaica. Yellowman had met Fats Domino where he performed on the island earlier in the decade, and Domino had presented him with a copy of his version.

By the mid-1990s, Yellowman released socially conscious material, rising to international fame along with singers such as Buju Banton. Yellowman became the island’s most popular deejay. During the early 1980s, Yellowman had over 40 singles and produced up to five albums per year.

He re-invented himself with his 1994 album Prayer, which stepped away from the slackness that gave him his initial fame. His latest albums are New York (2003) and Round 1 (2005). Yellowman was also a featured guest vocalist on the Run-DMC track “Roots Rap Reggae”. Yellowman continues to perform internationally with his Sagittarius Band, and has toured through places such as Nigeria where he retains a following of fans, as well as Spain, Peru, Sweden, Italy, Germany, Britain, France, Kenya, the United States and Canada. He also featured on OPM’s 2004 album, Forthemasses.

In 2018, it was announced that he would be awarded the Order of Distinction (Officer Class) by the Jamaican government.n 1982, Yellowman was diagnosed with skin cancer, and was initially told that he only had three more years to live.However, this prognosis proved to be inaccurate, and after several surgeries Yellowman was able to continue his career. The cancer went into apparent remission during this time. In 1986 it was diagnosed that the cancer had spread to his jaw; Yellowman underwent very invasive jaw surgery to remove a malignant tumor. This surgery permanently disfigured Yellowman’s face, as a large portion of the left side of his lower jaw had to be removed to successfully remove the tumor.

The instrumental for Yellowman’s 1982 “Zungguzungguguzungguzeng”, the “Diseases” riddim by “Junjo” Lawes, has been sampled and imitated repeatedly since its original release. The original version of this riddim was performed by Alton Ellis for a song called “Mad, Mad, Mad” produced by Coxsone Dodd in 1967. Coxsone Dodd had already released two dub cuts, “Talking Dub” and “Lusaka”, plus a 1980 cut by Jennifer Lara, “Hurt So Good.” This riddim came to be known as the ‘Diseases’ riddim after Michigan and Smiley recorded their song, Diseases, with Henry Junjo Lawes in 1981. The vocal melody of “Zungguzungguguzungguzeng” has also been sampled heavily in various reggae and hip hop songs.