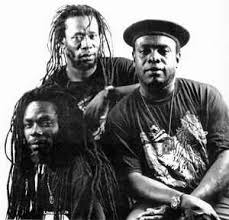 Mighty Diamonds are a Jamaican harmony trio, recording roots reggae with a strong Rastafarian influence. The group was formed in 1969 and remains together as of 2012. They are best known for their 1976 debut album Right Time produced by Joseph Hoo Kim and the 1979 release Deeper Roots. 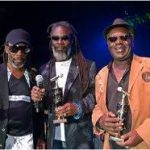 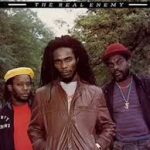 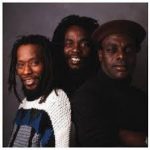 Formed in 1969 in the Trenchtown area of Kingston, the group comprises lead vocalist Donald “Tabby” Shaw, and harmony vocalists Fitzroy “Bunny” Simpson and Lloyd “Judge” Ferguson. They had become friends at school in the mid-1960s, and were originally called The Limelight, adopting ‘Mighty Diamonds’ after Shaw’s mother started referring to them as “the diamonds”.Their smooth harmonies and choreographed stage show were inspired by Motown vocal groups of the 1960s, with Shaw listing The Temptations, The Stylistics, The Impressions, and The Delfonics as influences as well as Jamaican rocksteady artists such as John Holt and Ken Boothe.

Their early recordings were produced by Pat Francis, Stranger Cole (“Girl You Are Too Young” (1970), “Oh No Baby”), Derrick Harriott (“Mash Up”), Bunny Lee (“Jah Jah Bless the Dreadlocks”, “Carefree Girl”), Lee “Scratch” Perry (“Talk About It”), and Rupie Edwards, but it was in 1973 that they had their first hit single with the Francis-produced “Shame and Pride”, recorded at the Dynamic Sounds studio.It was their mid-1970s work with producer Joseph Hoo Kim that gave them their real breakthrough.[1] “Country Living” and “Hey Girl” were recorded and released by the Channel One label. “Right Time” followed, on Hoo Kim’s Well Charge label, and cemented their status as one of the top Jamaican groups of the time.

Virgin Records signed them and the group’s début album, Right Time, was released in 1976, including most of their early Channel One hits.The album was an international success and for the follow-up, Virgin sent them to work with Allen Toussaint in New Orleans, with local musicians providing the backing. The resulting Ice on Fire album sold poorly, the production not appealing to reggae fans, and the album later described as “an attempt by New Orleans soul musicians to play reggae”.

Back in Jamaica, they continued to record for Channel One, with the Stand Up to Your Judgment album released in 1978, and continued to produce a string of hit singles. They also released records on their own ‘Bad Gong’ label. The group’s Deeper Roots, released in 1979, was their next big album success, again released by Virgin, on its Front Line label.

In the early 1980s they recorded with producer Gussie Clarke, largely using old Studio One tracks as the basis for their recordings, and dubplates of these sessions became popular on sound systems in Jamaica, New York, and London, particularly “Pass the Kouchie”, recorded on the “Full Up” riddim. Their work with Clarke produced the 1981 album Changes.

“Pass the Koutchie”, written by Ferguson and Simpson, became an international hit twice, when first released (on their 1982 album Changes) and again when it was covered by Musical Youth with altered lyric to remove the drug references, and released as “Pass the Dutchie”.

Their performance at Reggae Sunsplash in 1982 was released on an album later that year, paired with the performance from Mutabaruka.

The group continued to release albums regularly, adapting successfully to the prevailing digital rhythms of the 1980s and beyond. Tabby, Bunny and Judge have produced over forty albums in their long career.