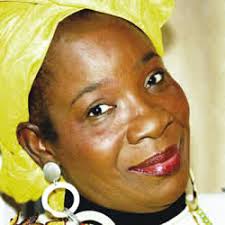 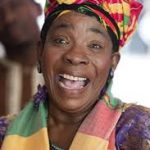 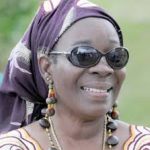 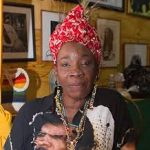 She was a member of the vocal group the I Threes, along with Marcia Griffiths and Judy Mowatt, who gained recognition as the backing vocalists for Bob Marley and the Wailers.

Rita was born in Santiago de Cuba, to Leroy Anderson and Cynthia “Beda” Jarrett. She grew up in the upper level of Beachwood Avenue, located in Kingston, Jamaica. In her book No Woman, No Cry: My Life with Bob Marley, she describes how she was raised by her Aunt Viola on Greenwich Park Road.

In the mid 1960s, Rita met Bob Marley after meeting Peter Tosh. After it was learned that she was a singer, she was asked to audition for the Soulettes. The group included Rita, her cousin Constantine “Dream” Walker, and Marlene “Precious” Gifford[citation needed] Bob Marley, then a member of the Wailers vocal trio along with Bunny Livingston and Peter Tosh, became the group’s mentor and manager and through working together, he and Rita fell in love.

Soulettes released recordings include rocksteady tunes such as “Time for Everything”, “Turn Turn Turn” (released in 1966, this was a cover of The Byrds’ hit song based on a Bible quote) and “A Deh Pon Dem”. “Friends and Lovers”, “One More Chance” and “That Ain’t Right” (featuring harmony vocals by the Wailers), as well as a duet by Rita and Bunny Livingston, “Bless You” were issued years later on the Lovers and Friends album.

After those recordings for the Studio One label coached by Bob, Rita married Bob Marley around February, 1966, just before her husband moved to Wilmington, Delaware (USA) for a few months to make a living working at the Dupont Hotel there. Bob was replaced by Constantine “Vision” Walker, who recorded a few songs as a member of The Wailers during this period.

Upon Bob’s return at the end of the summer of 1966, Bunny Livingston, Peter Tosh and Bob created their independent label Wail ‘n’ Soul’m, which released several Bob Marley and the Wailers as well as Peter Tosh and the Wailers 45RPM single records including Bend Down Low, Hypocrites and Tosh’s Dem Haffi Get a Beatin’ in 1966-1968.

As Bunny was jailed in 1968 for marijuana possession, Rita joined the Wailers, replacing Bunny for a few months. It is at that time that The Wailers met U.S. singer Johnny Nash, who produced a series of Wailers rocksteady recordings. In April 1968 Nash’s manager (and mobster) Danny Sims signed Peter Tosh, Bob and Rita Marley to exclusive publishing, management and production contracts in exchange for a few dollars and an opportunity to record in Kingston for the New York-based JAD label owned by Johnny Nash, musician Arthur Jenkins and Danny Sims.

Musicians on this 1968 Wailers session feature Peter Tosh and the Marleys. Rita sang vocals on a dozen fine rocksteady and soul tracks, most of which were not issued at the time. New recordings of Bend Down Low and Mellow Mood were issued as a single in the U.S.A. under the name “Bob,

Following the birth of Bob and Rita’s first child, David, in 1968, Bob returned to Delaware in 1969 to work on the night shift in a Chrysler factory. Bunny had returned to the Wailers at the end of 1968 and Rita did not record with Bob until 1974, when her husband formed the I Three (often wrongly spelt I Threes) harmony vocal group featuring Marcia Griffiths and Judy Mowatt to replace Peter and Bunny, who had left the band in 1973.

Together with the I Three, Bob Marley & the Wailers recorded the fine Natty Dread album in 1974 and many more, first rising to international superstardom in 1975 with “No Woman No Cry”. It was followed up by the 1976 smash hit album Rastaman Vibration. On 3 December 1976 two days before “Smile Jamaica”, a large free concert organized by Bob Marley with the support of Jamaican Prime Minister Michael Manley, Rita, Bob, and manager Don Taylor were wounded in an assault by gunmen affiliated to Marley’s opponents inside the Marley home. Rita survived a shot to the head and Taylor sustained serious injuries from being shot in the leg. Bob Marley had a bullet skid his chest and wound his arm. Bob nevertheless played this major show in Kingston, then went into exile.

Bob Marley, the Wailers, and the I Three, including Rita, moved to London in late 1976. By then Bob was living with Cindy Breakspeare, a Jamaican model who had just been crowned Miss World 1976. They would soon have a son, Damian. In spite of this, Rita stayed to sing with her husband.

After Marley’s death, she recorded a few albums under her name with some success in the UK.[1] A 1982 cover version of the Love Joys’s song “One Draw”was a successful single in Europe.

In 1986, Rita decided to convert Bob Marley’s home into the Bob Marley Museum. She is the Founder and Chairperson of the Robert Marley Foundation, Bob Marley Trust, and the Bob Marley Group of Companies. She adopted 35 children in Ethiopia and has assisted over 200 children in Konkonuru Methodist School in Ghana.[2]