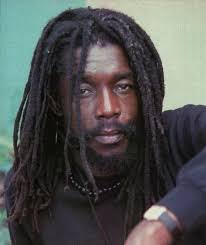 Peter Tosh, OM (born Winston Hubert McIntosh  19 October 1944 – 11 September 1987) was a Jamaican reggae musician. Along with Bob Marley and Bunny Wailer, he was one of the core members of the band the Wailers (1963–1976)  after which he established himself as a successful solo artist and a promoter of Rastafari. He was murdered in 1987 during a home invasion. 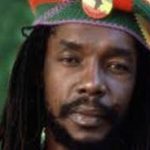 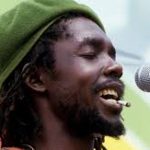 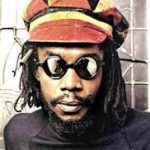 Tosh was born in Westmoreland, the westernmost parish of Jamaica. He was abandoned by his parents and “shuffled among relatives.” When McIntosh was fifteen, his aunt died and he moved to Trenchtown in Kingston, Jamaica. He first picked up a guitar by watching a man in the country play a song that captivated him. He watched the man play the same song for half a day, memorizing everything his fingers were doing. He then picked up the guitar and played the song back to the man. The man then asked McIntosh who had taught him to play; McIntosh told him that he had. During the early 1960s Tosh met Robert Nesta Marley (Bob Marley) and Neville O’Reilly Livingston (Bunny Wailer) and went to vocal teacher Joe Higgs, who gave out free vocal lessons to young people, in hopes to form a new band. He then changed his name to become Peter Tosh and the trio started singing together in 1962. Higgs taught the trio to harmonize and while developing their music, they would often play on the street corners of Trenchtown.In 1964 Tosh helped organize the band the Wailing Wailers, with Junior Braithwaite, a falsetto singer, and backup singers Beverley Kelso and Cherry Smith. Initially, Tosh was the only one in the group who could play musical instruments. According to Bunny Wailer, Tosh was critical to the band because he was a self-taught guitarist and keyboardist, and thus became an inspiration for the other band members to learn to play. The Wailing Wailers had a major ska hit with their first single, “Simmer Down”, and recorded several more successful singles before Braithwaite, Kelso and Smith left the band in late 1965. Marley spent much of 1966 in Delaware in the United States with his mother, Cedella (Malcolm) Marley-Booker, and for a brief time was working at a nearby Chrysler factory. He then returned to Jamaica in early 1967 with a renewed interest in music and a new spirituality. Tosh and Bunny were already Rastafarians when Marley returned from the US, and the three became very involved with the Rastafari faith. Soon afterwards, they renamed the musical group the Wailers. Tosh would explain later that they chose the name Wailers because to “wail” means to mourn or to, as he put it, “…express one’s feelings vocally”. He also claims that he was the beginning of the group, and that it was he who first taught Bob Marley the guitar. The latter claim may very well be true, for according to Bunny Wailer, the early Wailers learned to play instruments from Tosh.Rejecting the up-tempo dance of ska, the band slowed their music to a rocksteady pace, and infused their lyrics with political and social messages inspired by their new-found faith. The Wailers composed several songs for the American-born singer Johnny Nash before teaming with producer Lee Perry to record some of the earliest well-known reggae songs, including “Soul Rebel”, “Duppy Conqueror”, and “Small Axe”. The collaboration had given birth to reggae music and later, bassist Aston “Family Man” Barrett and his brother, drummer Carlton Barrett would join the group in 1970. The band signed a recording contract with Chris Blackwell and Island Records company and released their debut, Catch a Fire, in 1973, following it with Burnin’ the same year. The Wailers had moved from many producers after 1970 and there were instances where producers would record rehearsal sessions that Tosh did and release them in England under the name “Peter Touch”.

In 1973, Tosh was driving home with his girlfriend Evonne when his car was hit by another car driving on the wrong side of the road. The accident killed Evonne and severely fractured Tosh’s skull. After Island Records president Chris Blackwell refused to issue his solo album in 1974, Tosh and Bunny Wailer left the Wailers, citing the unfair treatment they received from Blackwell, to whom Tosh often referred with a derogatory play on Blackwell’s surname, ‘Whiteworst’. Tosh had written many of the Wailers’ hit songs such as “Get Up, Stand Up”, “400 Years”, and “No Sympathy”.Tosh began recording and released his solo debut, Legalize It, in 1976 with CBS Records company, Tuff Gong and Island Records. The title track soon became popular among endorsers of marijuana legalization, reggae music lovers and Rastafari all over the world, and was a favourite at Tosh’s concerts. That was his last album from the Wailers, Tuff Gong and Island Records.

On 11 September 1987, just after Tosh had returned to his home in Jamaica, a three-man gang came to his house on motorcycles and demanded money. Tosh replied that he did not have any with him but the gang did not believe him. They stayed at his residence for several hours and tortured him in an attempt to extort money from Tosh. Over the hours, as various Tosh’s associates arrived to visit him, they were also taken hostage by the gunmen. The gunmen became more and more frustrated, especially the chief thug, Dennis “Leppo” Lobban, a man whom Tosh had previously befriended and tried to help find work after a long jail sentence. Tosh said he did not have any money in the house, after which Lobban and the fellow gunmen began opening fire in a reckless manner. Tosh was shot twice in the head and killed. Herbalist Wilton “Doc” Brown and disc jockey Jeff ‘Free I’ Dixon also died as a result of wounds sustained during the robbery. Several others in the house were wounded, including Tosh’s common law wife, Andrea Marlene Brown, Free I’s wife, Yvonne (“Joy”), Tosh’s drummer Carlton “Santa” Davis and musician Michael Robinson.

According to Police Commissioner Herman Ricketts, Dennis “Leppo” Lobban surrendered and two other men were interrogated but not publicly named. Lobban went on to plead innocent during his trial, telling the court he had been drinking with friends. The trial was held in a closed court due to the involvement of illegal firearms. Lobban was ultimately found guilty by a jury of eight women and four men and sentenced to death by hanging. His sentence was commuted in 1995 and Lobban remains in jail. Another suspect was acquitted due to insufficient evidence. The other two gunmen were never identified by name. It is said that they were killed in a daylight gun battle in the street.Tosh also participated in the international opposition to South African apartheid by appearing at Anti-Apartheid concerts and by conveying his opinion in various songs like “Apartheid” (1977, re-recorded 1987), “Equal Rights” (1977), “Fight On” (1979), and “Not Gonna Give It Up” (1983). In 1987, Peter Tosh seemed to be having a career revival. He was awarded a Grammy Award for Best Reggae Performance in 1987 for No Nuclear War, his last record.