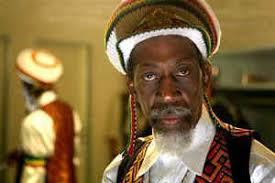 Neville O’Riley Livingston, OM (born 10 April 1947)  best known as Bunny Wailer, is a Jamaican singer songwriter and percussionist and was an original member of reggae group The Wailers along with Bob Marleyand Peter Tosh 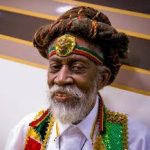 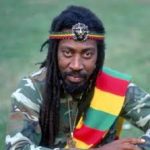 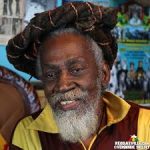 A three-time Grammy award winner, he is considered one of the longtime standard-bearers of reggae music. He is also known as Bunny Livingston and affectionately Jah B,

The young Neville Livingston spent his earliest years in the village of Nine Mile in St. Ann Parish. It was there that he first met Bob Marley, and the two toddlers befriended each other quickly. The boys both came from single-parent families; Livingston was brought up by his father, Marley by his mother.Later, Bunny’s father Thaddeus “Toddy” Livingston lived with Bob Marley’s mother Cedella Booker and had a daughter with her named Pearl Livingston. Peter Tosh had a son, Andrew Tosh, with another of Bunny’s sisters, Shirley, making Andrew his nephew.

Bunny had originally gone to audition for Leslie Kong at Beverley’s Records in 1962, around the same time Bob Marley was cutting “Judge Not”. Bunny had intended to sing his first composition, “Pass It On”, which at the time was more ska-oriented. However, Bunny was late getting out of school, missed his audition, and was told he wasn’t needed. A few months later, in 1963; he formed “The Wailing Wailers” with his step-brother Bob Marley and friend Peter Tosh, and the short-lived members Junior Braithwaite and Beverley Kelso. As he was by some way the least forceful of the group, he tended to sing lead vocals less often than Marley and Tosh in the early years, but when Bob Marley left Jamaica in 1966 for Delaware, replacing Bunny with Constantine “Vision” Walker, he began to record and sing lead vocals on some of his own compositions, such as “Who Feels It Knows It”, “I Stand Predominant” and “Sunday Morning”. His music was very influenced by gospel and the soul of Curtis Mayfield. In 1967, he recorded “This Train”, based on a gospel standard, for the first time, at Studio One.

He was arrested on charges of possession of cannabis in June 1967 and served a 14-month prison sentence.

As the Wailers regularly changed producers in the late-1960s he continued to be underused as a writer and lead vocalist, though was a key part of the group’s distinctive harmonies. He sang lead on “Dreamland” (a cover of El Tempos’ My Dream Island, which soon became Bunny’s signature song), “Riding High”, “Brainwashing” and on one verse of the Wailers’ Impressions-like “Keep On Moving”, both produced by Lee “Scratch” Perry. In 1971, he recorded the original version of “Pass It On” which was released on dubplate and wasn’t widely known until it appeared on JAD’s “Original Cuts” compilation many years later – this version of the song features different lyrics and music in the verses to the later versions of “Pass It On” – Bunny would later reuse these in “Innocent Blood”. By 1973, each of the three founding Wailers operated their own label, Marley with Tuff Gong, Tosh with H.I.M. Intel Diplo, and Bunny Wailer with Solomonic. He sang lead vocals on “Reincarnated Souls”, the B-side of the Wailers first Island single of the new era, and on two tracks on the Wailers last trio LP, “Burnin’“, “Pass it On” (which had been cut as a sound-system only dub plate five years earlier) and “Hallelujah Time”. By now he was recording singles in his own right, cutting “Searching For Love”, “Life Line”, “Bide Up”, “Arab Oil Weapon” and “Pass It On” (a new recording of the Wailers song) for his own label.

Bunny Wailer toured with the Wailers in England and the United States, but soon became reluctant to leave Jamaica. He and Tosh became more marginalised in the group as the Wailers became an international success, and attention was increasingly focused on Marley. Bunny subsequently left the Wailers in 1973  to pursue a solo career after refusing to tour when Chris Blackwell wanted the Wailers to tour freak clubs  in the United States, stating that it was against his Rastafari principles. Before leaving the Wailers, Bunny became more focused on his spiritual faith. He identified with the Rastafari movement, as did the other Wailers. He has also written much of his own material as well as re-recording a number of cuts from the Wailers catalogue. Bunny Wailer has recorded primarily in the roots style, in keeping with his often political and spiritual messages. He and Tosh would frequently sing each other’s background vocals in the start of their solo careers. The album Blackheart Man is a good example of his roots reggae style.

After leaving the Wailers, He experimented with disco on his album Hook Line & Sinker while Sings the Wailers successfully reworks many of The Wailers songs with the backing of top Jamaican musicians, Sly and Robbie. He has also had success recording in the typically apolitical, more pop, dancehall style. He has outlived his contemporaries in a culture where death by violence is commonplace.

However, he also had a dancehall/Rockers edge that was best exemplified by the album Bunny Wailer Sings the Wailers in which he re-interprets some of the Wailers material as a solo Roots singer backed by a solid Sly & Robbie based Roots reggae grouping. The album produced by Bunny Wailer, was recorded at Harry J Studio. Some of these tracks are re-worked classic Wailers tracks (e.g. “Dreamland” — a cover of El Tempos’ “My Dream Island” with slightly reworked lyrics that became Bunny’s signature song. This was first recorded in 1966 by Clement Coxsone Dodd, and later in 1970 with Lee “Scratch” Perry, then, released as a 7″ in 1971 with a U-Roy version on the B -Side). Another classic is “Dancing Shoes”, first recorded in the mid-1960s as a driving ska/soul classic with Bunny Wailer as lead vocal.

Bunny Wailer has won the Grammy Award for Best Reggae Album in 1991 for the album “Time Will Tell: A Tribute to Bob Marley”, 1995 for “Crucial! Roots Classics”, and 1997 for “Hall of Fame: A Tribute to Bob Marley ‘s 50th Anniversary (RAS)”.He was also featured on the album True Love by Toots and the Maytals, which won the Grammy Award in 2004 for Best Reggae Album, and showcased many notable musicians including Willie Nelson, Eric Clapton, Jeff Beck, Trey Anastasio, Gwen Stefani / No Doubt, Ben Harper, Bonnie Raitt, Manu Chao, The Roots, Ryan Adams, Keith Richards, Toots Hibbert, Paul Douglas, Jackie Jackson, Ken Boothe, and The Skatalites.

Today, Bunny resides in Kingston and on a farm located in the interior of Jamaica (Saint Thomas), according to Bob Marley’s official website. Bunny Wailer and Beverley Kelso are the only surviving members of the original Wailers.

In August 2012 it was announced that Bunny Wailer would receive Jamaica’s fifth highest honour, the Order of Jamaica.

In 2016, he played a month-long ‘Blackheart Man’ tour to celebrated the 40th anniversary of his 1976 album.

In October 2017 he was awarded the Order of Merit by the Jamaican government, the nation’s fourth-highest honour.